Now What? A Look at Historical Bear Markets

In just the past four weeks, the coronavirus pandemic has had a significantly adverse impact on global economies and markets. From the market close on February 19 through the close on March 23, the S&P 500’s price fell -34% before rebounding somewhat to close down -20% for the first quarter.

Efforts to contain the virus via “stay at home” measures will ultimately cause a steep decline in economic activity, and we think it’s pretty likely that we are now in recession. Many investors are rightfully asking the question “Now what?”

While we can’t know for sure what the future holds, we can look to history for potential answers.

How Bad Can It Get?

The first quarter included the fastest bear market (defined as a market decline of at least 20% from the previous all-time high) on record. We can’t say if we’ve reached the bottom yet or how large the decline will be if the sell-off continues. But to help frame our thinking, we looked to previous bear markets to provide some clues and perspective.

To begin with, we think it’s pretty unlikely that this will lead to another depression. Practically every major decision that policymakers made in the 1930s was wrong: They raised interest rates, raised taxes, and launched a global trade war via the Smoot-Hawley Tariff Act. Collectively, these decisions served to lengthen and deepen the Great Depression.

Conversely, the size and speed of current responses by the Fed and Congress have been unprecedented. The Fed hastily cut its target interest rate to 0%, launched QE 4, and implemented other extreme measures. So far, all this has helped keep Wall Street functioning.

Meanwhile, in just a few months after China reported its first coronavirus fatality, Congress passed the Coronavirus Aid, Relief, and Economic Security (CARES) Act to help stabilize Main Street. The CARES Act totaled $2.2 trillion, and there are talks of more fiscal stimulus coming. For comparison, the American Recovery and Reinvestment Act, the stimulus legislation that helped end the Great Recession, was only $787 billion and was signed into law about a year and a half after the financial crisis began.

Having made the argument that we think a depression is unlikely, we studied the S&P 500’s 10 bear markets that occurred post-Great Depression (i.e., “The Modern-Era Bear Markets”).

Exhibit 1 indicates that the average bear-market decline was -35%. While the market can certainly decline further from here, the peak-to-trough decline to-date of -34% suggests we’re in the ballpark of the lows.

History suggests the market rewards those who invest and remain invested throughout the worst of it.

History has rewarded investors who remain invested during bear markets. Exhibit 1 shows that, on average, the S&P 500 rose 40% the year after the trough of each bear market we examined. Investors who sold out of fear at the bottom not only locked in losses but also likely missed a significant part, if not all, of the market’s rebound.

While it’s understandable that investors may focus exclusively on the near-term pain and negative headlines, it’s important to also keep in mind that we have fully recovered from every bear market we’ve ever had. As shown in Exhibit 1, the S&P 500 has historically made up all lost ground in previous bear markets in an average of about two years, give or take.

… before the economy recovers and all the news is good.

The stock market is a leading indicator of economic activity. It typically changes directions before the economy does, and headlines generally don’t turn favorable until the economy does. 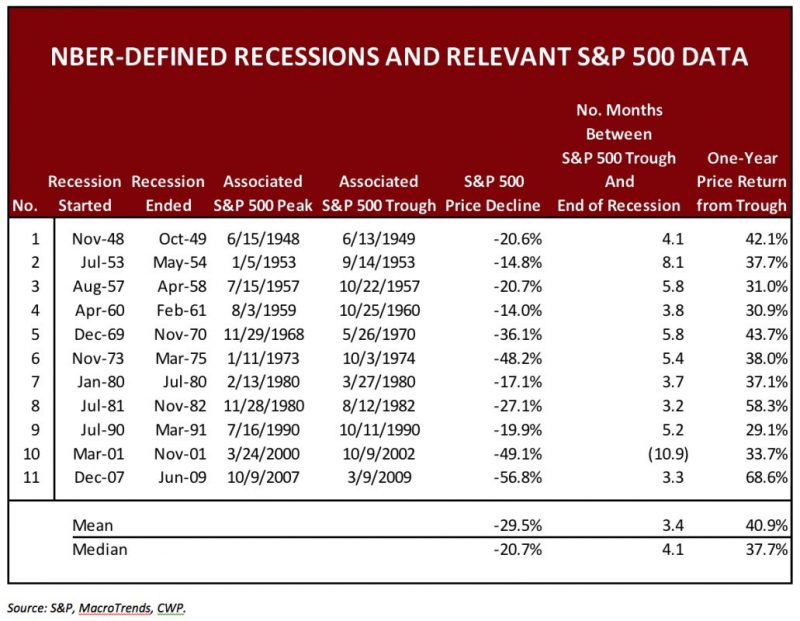 Moments of global turmoil naturally create anxiety and can even make investors lose faith in the economy and markets. However, history suggests while the pain of market losses is very, very real, the recovery will come. While asking “Now what?” is a valid question in a moment of crisis, it’s equally important to remember the other side of bear markets contains opportunity and reward to all investors.

As Partner and Chief Investment Officer, James Walden strives to maximize our clients’ long-term, risk-adjusted portfolio returns. This includes determining strategic and tactical asset allocations, as well as specific investment analysis and prudent rebalancing. Jim is also a partner and management team member. His expertise includes advanced investment research and valuation, and he is passionate about his role in helping clients reach and exceed their financial goals.
Scroll To Top